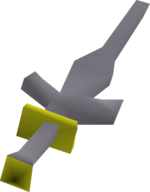 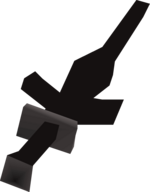 Silverlight is a demonbane sword that is very effective against demonic creatures. It is first obtained during the quest Demon Slayer, where it is used to defeat Delrith. During Shadow of the Storm, Silverlight is dyed black using black dye, and later becomes Darklight after it is stained with the blood of Agrith-Naar.

When using Silverlight to fight demons, the player's maximum hit is increased by 60%[1] (approximately the same as a rune longsword); however, its accuracy remains the same. When not fighting demons or Vampyres, Silverlight is comparable to a steel longsword with a lower strength bonus and a small, additional Magic Defence bonus.

If it is lost, it can be bought back from Sir Prysin for 500gp at Varrock palace. It can also be sold to the Wise Old Man for 80gp. It is possible to obtain multiple Silverlight swords by dropping them and buying more, or by getting it mounted in a player-owned house at level 42 Construction.

Warning: Dyeing Silverlight black will consume all non-dyed copies of the sword in your inventory, leaving only one dyed sword. This can be avoided by banking or dropping extras before dyeing a sword.

After completion of Shadow of the Storm, Silverlight can only be reclaimed from Sir Prysin in free-to-play worlds from accounts without active members subscriptions. Members can only obtain a Darklight from Sir Prysin, which requires being on a members world with 1,000 coins to pay him. Attempting to reclaim it on free-to-play world with an active membership yields a message directing the player to login to a members world.