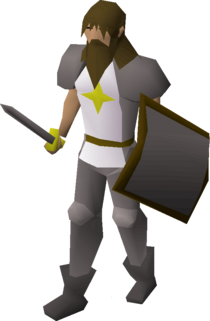 Sir Harry is a paladin and a member of the Royal Army of Ardougne that must be killed during the Underground Pass quest in order to collect the red paladin's badge. After completing the quest, if the player speaks to Sir Harry, he will recognise the player and attack.