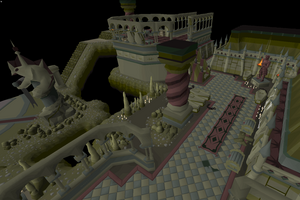 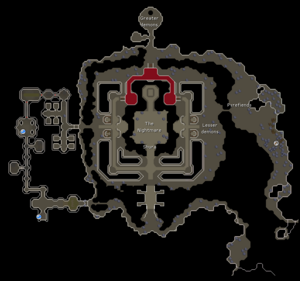 The Sisterhood Sanctuary, also known as the Slepe Dungeon, is a formerly-sealed subterranean complex beneath Slepe created by the Sisterhood, who were former Justiciars that abandoned Saradomin and pledged allegiance to Zamorak during the Third Age. The entrance can be found via a house just south-west of the town's church.

When The Sisterhood took residence at an abandoned hermitage north-east of Meiyerditch, they soon expanded the town (the original name of which is not currently known) by building additional houses, and digging deeper into the dungeons beneath, where they would build the Sisterhood Sanctuary, a place where they could enact their rites and offerings in relative peace.

While the elixir did indeed extend their life, it had the side effect of causing the drinker to sleep for longer periods of time, until one day they were trapped in an eternal slumber, never to wake up. Realising the consequences of messing with the natural order, the people of the town, in accordance to the laws set by Phosani, moved the sleeping members of the Sisterhood deep into the Sanctuary with all their possessions.

Out of respect and fear, the entrance to the Sanctuary was sealed, never to be opened until Phosani wakes up. In addition, the formula for the Elixir of Everlasting was hidden away to prevent others from suffering its side effects. In honour of Phosani, they renamed the town to Sleep, but over the centuries, the spelling was eventually changed to Slepe.

Today, the town is suffering from the Sleeper Plague, with symptoms akin to that of Phosani's many years ago. This plague has attracted The Nightmare, who was driven out of Ashihama in the Wushanko Isles, to the town. The Nightmare, who drains the life force of sleeping people and gives her victims horrible nightmares, has become much more powerful as a result of her arrival to Slepe.

The two quickest methods of reaching Slepe, where the Sisterhood Sanctuary is found, are:

To the east is the main entrance to the Sisterhood Sanctuary. To the north is a small inaccessible room filled with barrels of blood. Here, players can cast Telekinetic Grab on the bloody grimoire in the room. Further north, the vampyre Kroy can be seen experimenting on potions in a makeshift laboratory. The ladder can be climbed, leading to the ground floor of the Crombwick Manor.

North of Kroy's laboratory, another room with six hidden statues can be seen with an old key laying on the floor, which is used open the chest on the 2nd floor[UK]3rd floor[US] of the church above. This room, and by extension the old key, is inaccessible until the player kills Kroy during Sins of the Father.

The Sanctuary is where The Nightmare rests, in the centre of the Sanctuary. Players entering the Sanctuary will first see the Oathbreakers, former Saradomin monks who have converted to the Zamorakian way. Further north, players will find Shura and The Nightmare, where players can fight her. You may bring a Multi-cannon if you wish.

East of the Sanctuary, some lesser demons and pyrefiends can be found, alongside pyrelords, who can only be found here. A mine can also be found here containing several iron and coal rocks.