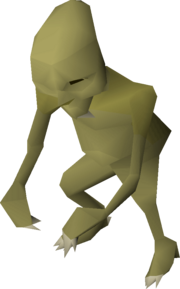 Skavids are an elusive race of small, clawed humanoid creatures that dwell in the Feldip Hills in small caves. They are forced to serve as slaves to the Ogre race around the city of Gu'Tanoth. Skavids can be found in their dark Skavid caves, where the player must explore in the Watchtower quest, though they need maps to find their way around the caves.

Skavids, in addition to speaking the human language, also speak in their native tongue (known simply as Skavid) for safety, so their cruel Ogre masters can't understand what they are saying. During the Watchtower quest players must learn to speak a small amount of Skavid words and phrases in order to get the Skavids to help them.

Once the basics are understood the player may start to understand what is said by some Skavids and the correct thing to reply to it, thus putting the Skavids at ease and making them more likely to aid the player.

There are only 15 currently known Skavids in the world.

Skavids were the indigenous race of Feldip Hills, but they were forced almost to extinction in the Third Age by Bandos and his army. The Ogres now inhabit the area that originally housed peaceful Skavids, on the premise that Bandos wanted them to live there rather than other places.