The skavid map is required to successfully navigate the Skavid caves around Gu'Tanoth. Without possession of this map, players entering into one of the Skavid caves will immediately exit the next cave entrance in a clockwise direction, the last one being next to Toban's island, before starting at the north-west cave again. Players do not need to read the map to enter the Skavid caves, only have it in their inventory.

During the Watchtower quest, you obtain the map by visiting the ogre city guards all the way at the end of the path leading into Gu'Tanoth. You will need a rock cake to bribe an ogre guard, 20 coins to pay a guard to let you jump over a broken bridge, and a death rune to give to a city guard in exchange for the map.

After the quest, the map can be freely reobtained if lost by talking to one of the two city guards. The city guards are located next to the ogre named Keef, on top of the eastern hill next to the Agility shortcut. You can access here by climbing the agility shortcut (71 Agility required), or by following the four bridges around to it, starting at the south-west of the city.

A skavid map is required in order to pick cave nightshade from a skavid cave for a medium achievement in the Ardougne Diary. One can be found in the northernmost cave entrance, west of Yanille, and south of the lake with the island in it.

If you choose to read the map, you see a highly stylised map that approximately shows the entrances to the caves. 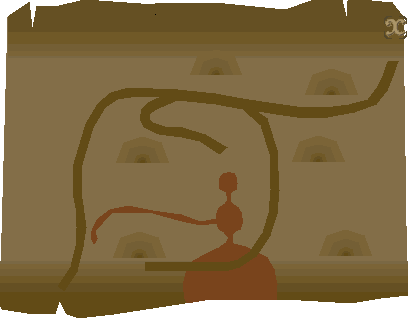