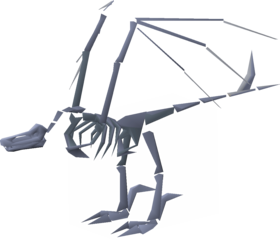 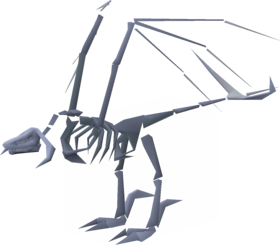 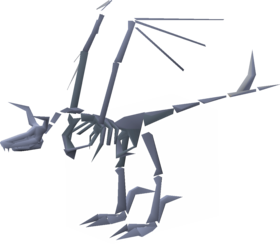 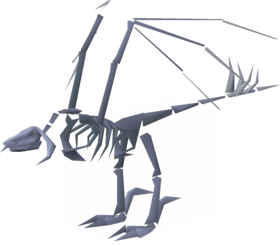 Skeletal wyverns are Slayer monsters that require a Slayer level of 72 in order to be harmed. They are found at the end of the Asgarnian Ice Dungeon. Like other wyverns, they require an elemental shield, mind shield, dragonfire shield, dragonfire ward, or ancient wyvern shield to reduce damage from their icy breath; however, it is not required to be slain. They are also the only monster that drops granite legs.

Although it is insinuated in Tarn's diary that skeletal wyverns are undead, they are in fact re-animated remains, whereas actual undead creatures have come back to life. This means that the Salve amulet and its enchanted versions do not work against them.

Skeletal wyverns are assigned by the Slayer masters Chaeldar, Konar, Nieve, and Duradel. Because an elemental shield or better is required to defend against their icy breath, they will only assign them if the player has completed the Elemental Workshop I quest.[1]

Unlike the wyverns that reside within Fossil Island, skeletal wyverns do not drop the wyvern visage; rather, they drop the draconic visage.

There is an upper level available to players that are assigned them as a slayer task.

Skeletal wyverns have high Defence, Attack, and Hitpoints, thus making them very challenging opponents. They attack with melee, Ranged, or their unique ice-breath attack. This attack can freeze players similar to the Ancient Magicks' ice spells, with the addition of preventing the player from retaliating back for the duration of the freeze. However, players may still eat food or drink potions while frozen. Players can wield an ancient, mind, elemental, or dragonfire shield/ward to reduce the wyverns' ice breath's max hit to 10. The ancient wyvern shield also makes the player immune to the freezing effect of the icy breath. Armour does not affect the accuracy of the ice-breath attack; the ice-breath will hit through all types of armour.

Protect from Missiles is the suggested Prayer to use against them due to the amount of range damage skeletal wyverns do, although it is not needed if you can safespot them.

As the wyverns are draconic creatures, dragonbane weapons such as the dragon hunter lance (on the pound/swipe stance, as wyverns' stab Defence is rather high) and the dragon hunter crossbow are the best choices to kill them swiftly. They are one of the only monsters in the game vulnerable to both dragonbane weapons and dragonfire effects. A dragon hunter crossbow with enchanted dragonstone bolts can be extremely effective against them. Due to their moderate melee Defence, melee is recommended to kill wyverns, unless the player's Defence level is low. If killing wyverns with melee, an abyssal whip or other high-accuracy slash weapon is recommended. Wyverns are slightly weak to Magic. 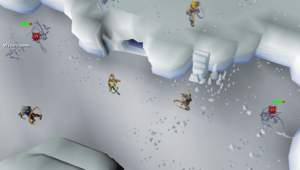 The most popular way of safespotting Wyverns is done by trapping the eastern or western one on the side of the cave entrance after losing aggression, as shown. 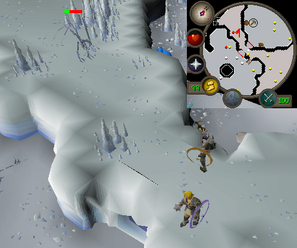 Wyverns can be safespotted in multiple ways. A common method for doing this is getting them stuck behind the main entrance. Players should always wait for the wyverns to become unaggressive, which takes 10 minutes, before attempting this; otherwise, they'll get hit by other wyverns when trying to safespot another. A good method to make them unaggressive is to wait in front of the main entrance for ten minutes; this will make the wyverns unaggressive near the entrance. Players who do this should be careful not to walk more than a few steps deeper into the cave, as if they do, the wyverns will get aggressive again. Alternatively, for safespotting, players can bring a few Prayer potions and attack the wyvern from seven steps away with Protect from Range on.

Drop rates estimated based on 228,591 kills from the Drop Rate Project, unless otherwise cited.

The average skeletal wyvern kill, including its unique drops, is worth 17,702.00. Excluding the draconic visage, dragon platelegs, dragon plateskirt and granite legs drops, the average kill is worth 16,601.00.

There is a 7/128 chance of rolling the herb drop table. 3 herbs are always dropped at a time.