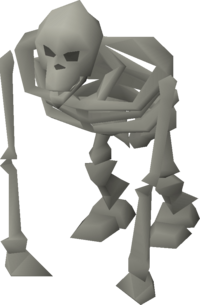 These Skeletons are undead gorillas found in the multi-combat Ape Atoll Dungeon. Players are required to run past them during the Monkey Madness I quest in order to reach Zooknock. Players are advised to use Protect from Melee against these monsters, as they attack accurately and can easily overwhelm with their sheer numbers.

They are aggressive to all players who are not using a greegree to turn themselves into a monkey.

Their tendency to cluster around a player means that they are often a popular choice for players powertraining Ranged or Magic. Players who have access to Maniacal monkeys should kill them instead as these skeletons do not have any drops to mitigate supply costs.

It is worth noting that these skeletons have the tendency of spawning from the bones they drop. To prevent an overflow of extra skeletons, they will disappear into a pile of burning bones after a short while. When they respawn, they do so with an animation of them coming out of the ground, this is unique among other monsters. The bones cannot be taken away from Ape Atoll, and when teleporting out a message appears saying 'The skeleton bones you are carrying crumble to dust'. Ashes are then left in your inventory.

As stated previously, skeleton monkeys provide excellent Ranged experience rates when attacked with chinchompas of any kind. High ranged bonus is advisable to reduce the amount of failed attacks. It should be advised that upon death, ALL chinchompas will be lost, and they will not be retrievable upon death. Low levels or people who suffer from lag should consider bringing far fewer chinchompas.

Using Ancient Magicks to kill skeleton monkeys is considered one of the best magic training methods. Due to the high cost of runes it is recommended to bring good equipment to minimise the amount of splashing. Note that in some cases prayer bonus should be prioritised over magic bonus.