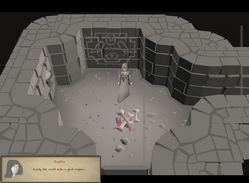 A skeleton is briefly seen in a cutscene during the Enakhra's Lament quest, animated from a pile of bones by Enakhra. As the scene displays, Enakhra is attempting to create weapons for her lord Zamorak, but is disappointed by the result.

It is likely that the skeleton shown in the cutscene is a precursor to the Boneguards fought during the quest.