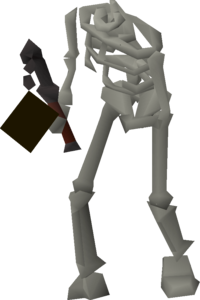 Skeletons are level 132 undead monsters found in the Shayzien Crypts. The crypts were constructed long before the founding of Great Kourend 1,510 years ago, but within the last few hundred years were overrun by zombies and skeletons.

There are three types of skeletons found in the crypts, with each variant attacking with a different combat style. Because of their high maximum hit and the fact that the crypts are a multicombat area, fighting these skeletons can be quite difficult. Strong armour coupled with prayer can help to mitigate their damage, and the Salve Amulet and its variants are helpful in dealing damage to quickly kill them.

Drop rates estimated based on 13,910 kills from the Drop Rate Project, unless otherwise cited.

The average Skeleton (Shayzien Crypts) kill is worth 943.22.

There is a 1/120 chance of rolling the herb drop table.

There is a 1/120 chance of rolling the general seed drop table.