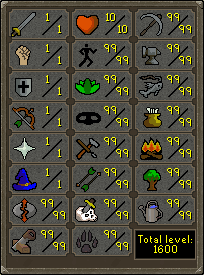 The maximum total level for a skill pure is 1600.

A Skill pure, or level 3 Skiller, is a type of pure that only develops non-combat skills. Level 3 skillers keep their Combat skills at level 1, leaving their combat level at 3. This makes it challenging to gain levels, as some regions of Gielinor have high-damage dealing monsters to be wary of, and some simply require quests with combat involved.

Skill pures are recommended to equip a bow without wielding any ammo, to prevent the account from engaging in combat. Bows available to skill pures include the training bow, standard bow, standard crossbow, rain bow, cursed goblin bow, and the phoenix crossbow. Also, skill pures are advised to set attack options on both players and monsters in the options tab to hidden. This is to prevent gaining any Combat experience in the event that a monster is accidentally attacked.

This is a challenging way to compete with the rest, and is seen among level 3s as being really rewarding!

The best gloves a level 3 skiller can get is steel gloves, as other Recipe for Disaster subquests require killing monsters or getting combat experience.

The following quests can be completed by Skill pures as they do not reward the player with any experience points in skills that would raise the character's combat level. Some quests require food and rings of recoil.

Finishing all of these quests would require the skill levels in the box to the right.

These following diaries can be done by skill pure whilst keeping Combat at level 3.

There are also certain activities a skill pure can do. Activities listed below are possible to play whilst keeping Combat at level 3.

Ironman skillers can also participate in the TzHaar Fight Pit.

Certain non-combat skills help skill pures in Combat, specifically defending. These skills are extremely helpful and recommended to be trained.

Some skill pures also have a set-up when doing quests or activities involving combat. Here's a common one that keeps the items up to three to prevent losing items.