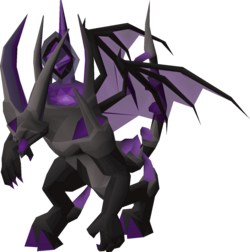 Skotizo is a demonic boss located beneath the Catacombs of Kourend. Accessing its lair requires the use of a dark totem on the altar found in the centre of the Catacombs; one dark totem permits only one attempt, which makes it a sporadic boss.

Skotizo can be substituted for both Black demon and Greater demon kills during Slayer tasks.

After he and his soldiers' cunning at the Battle of Carrallangar, Zamorak personally gave them their next mission, something he rarely did. The mission was to lead an expedition to recover a certain artefact in the Karamjan Temple found within the Kharazi Jungle. Skotizo was delighted by being assigned the mission and set out as soon as possible to please his god.

Reaching the Temple after a few days, Skotizo and his squad had managed to reach the Temple's centre after navigating a large maze. Now in possession of the artefact, Skotizo betrayed his squad, taking the artefact's power for himself and decimating the expedition team. Zamorak held Zalcano responsible for Skotizo's treachery, cursing her to turn into stone until she brings her brother before him.

Skotizo managed to avoid Zamorak's wrath and travelled to Great Kourend, where he used the artefact to summon a large variety of monsters, creating what is known today as the Catacombs of Kourend. Skotizo remained in the large chamber underneath the catacombs; roughly 200 years after the Kourend civil war, he encountered and killed an adventurer who stumbled into his chamber while investigating mysterious disappearances.

Drop rates estimated based on 18,964 kills from the Drop Rate Project, unless otherwise cited.

Skotizo will always drop one ancient shard, with a chance to drop an additional 1-4[1], for an average of 1.41 ancient shards per kill.