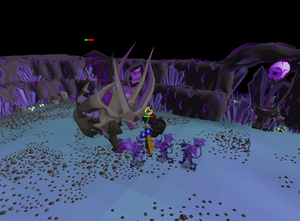 Generally, the best method to fight Skotizo is to use Arclight and wear armour with high Magic Defence (e.g. black dragonhide armour) while having Protect from Melee active so the only source of damage will be from Skotizo's Magic attacks. If the player can afford one, a Twisted bow is the most effective weapon for Skotizo, and it can be used at range while praying Protect from Magic to take no damage. A Dragon warhammer is also helpful for the fight for its special effect, but players without one may use their Arclight special attack for similar results.

At any time during the fight, Skotizo will randomly activate the Awakened Altars found in the north, south, east and west central areas of the room. These Altars, which have 100 Hitpoints each, increase its Defence and apply a damage reduction effect while activated. It is best to take them out whenever two or more are present as they will drastically increase its Defence and reduce damage by up to 60% with Arclight and up to 100% with other weapons (15% and 25% per tower respectively). When travelling to disable the Awakened Altars, the player should temporarily switch to Protect from Magic, as Skotizo does not close in to use melee attacks. Arclight will instantly disable them in one hit regardless of the player's stats and gear; this effect does not extend to the demonbane spells in the Arceuus spellbook. Stamina potions are advised since you will have to run around to disable the Altars. Note that having an Arclight equipped or in a player's inventory will cause more altars to spawn. For this reason players looking to save on stamina potions or just prefer less running might not want to use the Arclight. Toxic blowpipe is a great weapon against the altars in case the player does not have Arclight.

After two-thirds of Skotizo's health is depleted, it will summon three reanimated demon spawns to aid it. Skotizo may also summon a Dark Ankou to aid it under unclear circumstances. If the player is using Protect from Melee, they will pose no threat. If the minions are slain, Skotizo may summon them again. As such, fighting the minions provides no benefit, so the player should instead focus on Skotizo and the Altars.

Ranging is recommended over melee with a twisted bow. Other ranged weapons are less effective than arclight, but may alternatively be used by pures or to take no damage from Skotizo's melee attacks.