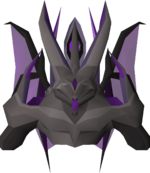 Skotos is a pet dropped by Skotizo. It is a much smaller version of Skotizo. The pet has one of the highest drop rates for a one-off pet at 1/65; this is due to the time it takes to assemble a dark totem being taken into account.