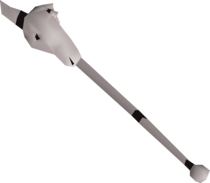 The skull sceptre is obtained by combining untradeable items dropped by monsters residing within the Stronghold of Security. Its defining feature is the ability to teleport to the entrance of the Stronghold, located in Barbarian Village, which consumes a charge.

Despite being a staff and having the combat style for it, the Skull sceptre is not able to autocast spells.

The sceptre initially holds 10 charges, but it can be upgraded to contain more charges by completing different tiers of the Varrock Diary: 14, 18, 22, and 26 respectively after each tier. The maximum number of charges carries over to F2P, even if the player loses membership. Once all charges have been consumed, a non-imbued sceptre will self-destruct.

Skull sceptres or their constituent parts can be crushed with a chisel to yield tradeable Bone fragments, each of which adds one charge when used on the Skull sceptre (i). When chiseled, the full skull sceptre will provide a base quantity of 14 bone fragments, increasing by four for each Varrock diary tier the player has completed.

Where to find the pieces[edit | edit source]

Each piece has a roughly 3% chance of being dropped by the following monsters:[1]

Upon creation, the sceptre will gain the maximum number of charges unlocked by the player's level of completion of the Varrock Diary. Note that players are required to create a skull sceptre as part of the Varrock Hard Diary.

Players with the RuneScape Authenticator enabled on their account can imbue the sceptre by taking it to Solztun near the Cradle of Life, who will turn it into a skull sceptre (i). Collecting a pair of fancy or fighting boots is a requirement for imbuing, however the boots do not need to be in the player's inventory during the process.

While imbued, it will not break upon depleting all its charges. Should players disable the Authenticator, the sceptre will revert to a regular skull sceptre.

The imbued skull sceptre can be recharged with sceptre pieces: each piece will grant three teleport charges, and the combined pieces (strange skull and runed sceptre) will grant six charges. The left skull half dropped by ankou gives 5 charges. Players may also use a chisel to break previously made sceptres down into fragments, and use the pieces to charge the the imbued sceptre.

The most efficient method is to kill the level 12 minotaurs found on the first sublevel of the Stronghold of Security, as they have the lowest Hitpoints and therefore can be killed the fastest. A different method is to kill the Flesh Crawlers found on the second sublevel, as they are always aggressive to the player, regardless of their combat level. Together with them only having 25 Hitpoints, this makes for a low-intensity way of getting sceptre pieces.