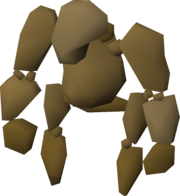 The Slagilith is an enemy encountered during the One Small Favour quest, inside the Goblin Cave. It is summoned when attempting to free Petra Fiyed from the rock face; the player fails to properly cast the spell contained within their scroll, thus accidentally animating some rocks nearby.

The Slagilith attacks within melee range and can hit up to 13 damage, so Protect from Melee is advised, although it is quite inaccurate. In addition, it has fairly high melee defence bonuses and reduces your damage by 67% against any weapon that isn't a pickaxe.[1] Despite this reduction, Guthan's set effect will still heal for the original non-reduced damage if triggered. The Slagilith is also unique in that the player receives 16xp of a corresponding attack style per 1 damage.

If a low level account is facing this monster, they're advised to apply neutral damage from rings of recoil, which can, in turn, significantly speed up their kill - note that such effect will only be triggered whilst wielding a pickaxe. The two rock piles nearby can be used as safespots for mage attacks, ranging or flinching, by trapping Slagilith off melee range. Equipping a pickaxe before ranged or magic attacks hit will allow them to do full damage. The Slagilith will disappear within 5 minutes after it is summoned.

High-levelled players should not have any problem dispatching this monster, assuming they bring a good pickaxe and gear.

When defeated during the quest, it proceeds to drop an adamantite ore, an uncut diamond and an uncut ruby, and cannot be defeated again at this location. It can only be fought again at the Nightmare Zone, but will not drop anything there. 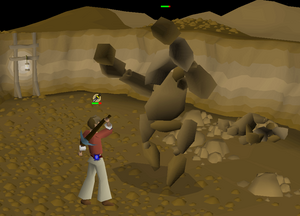 Hacking away at the slagilith.