From Old School RuneScape Wiki
Jump to navigation Jump to search
The RuneScape Wiki also has an article on: rsw:Slayer
For a list of all requirements and unlockables within the Slayer skill, see Slayer/Level up table.

Slayer is a skill that allows players to kill monsters that may otherwise be immune to damage. Players must visit a Slayer master, who will assign them a task to kill certain monsters based on the player's Combat level. Slayer experience is roughly equal to a slain monster's Hitpoints, and is awarded each time the player kills an assigned monster.

Many players primarily train Combat by completing Slayer tasks, as Combat experience is still given as normal while fighting Slayer monsters. Slayer is a very profitable skill to train, as high levelled Slayer monsters, such as Slayer bosses have a multitude of both rare and valuable drops.

As of 12 December 2013, players can earn Slayer points by completing assigned tasks.

To receive a Slayer task, players must visit one of nine Slayer masters throughout RuneScape. All but two Slayer masters have a Combat level requirement, and the final Slayer master also has a Slayer level requirement. The tasks assigned are generally appropriate for the Combat level of the player, assuming they use the highest level master available. Players may be assigned normal monsters to kill, or they may be assigned monsters that require the use of Slayer-specific items to deal damage or Slayer-specific armour to prevent stat reduction.

The Slayer equipment necessary to kill slayer monsters can be purchased from any slayer master. When you get your task, you can ask the master for advice on killing the assigned monsters, and they will tell you if special equipment is required. If no special equipment is necessary, they will give you other tips or advice such as if the monster is weak to poison or Magic.

One of the things the masters sell is an enchanted gem. Once you start training (this involves some begging from your chosen master), you get one for free. Afterwards, you can buy them for 1 coin each. These allow you to contact your Slayer master, ask for tips, ask who the monster is and where it is located, and most importantly, see how many monsters you still have to kill before completing the task. The gems cannot be used to get a new assignment; for that, you must see a master in person. An alternative to the gem is a combat bracelet, which will update the player every 10 kills while worn.

Players who have unlocked the Lunar Spells can also use the NPC Contact spell in order to receive a new assignment from a Slayer master of their choosing. The Slayer gems automatically put you through to the Slayer master who will be best for training you; this may not be the one who gave you the assignment. It is advised to use the master the Slayer gems contact you to.

The masters vary in the level of difficulty of their assignments; several of them require certain combat levels before you may get assignments from them. If you go to a Slayer master that is too hard for you, Turael in Burthorpe may consider giving you an easier assignment if the task is something that he doesn't normally assign. For example, if Duradel assigns you desert lizards, then Turael cannot change your task, as he too assigns desert lizards. All slayer masters can assign the same monsters as the masters below them; however, as their difficulty increases, there is a substantially higher chance of getting a more difficult monster. The masters are shown on the map with a yellow skull

Note: Skipping assignments through Turael is not a recommended choice, as it's better to gain Slayer points from doing tasks in a row and spending it on blocking or skipping your current task without breaking your task streak, as Slayer points also allow you to buy useful items and perks.

A handful of Slayer masters dot the map; each master gives assignments oriented towards a general range of Combat levels.

Some monsters can only be killed once players have reached a certain level in Slayer. Not all of them require special equipment.

Where to slay monsters[edit | edit source]

Note many assignments have alternate monsters that can be slayed instead.

Players who have unlocked the Like a boss ability via spending 200 Slayer reward points can have Nieve/Steve, Duradel, Konar quo Maten or Krystilia (Wilderness only) assign them boss monsters in addition to the tasks they already assign. Slayer masters will check the requirements needed to access the boss; for example, if the player doesn't have 85 Slayer, they won't offer them an Abyssal Sire task. They will allow the player to decide the amount of bosses they wish to kill for that task, ranging from 3 to 35 (up to 36 for Barrows) per task.

Completing this type of assignment will always grant 5,000 Slayer experience after the task is complete. The following bosses can be assigned:

This section details a discontinued feature and is kept here for historical purposes. 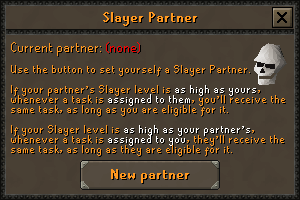 Slayer Partners were introduced to Old School RuneScape on 7 May 2015, which allows two players to work together on a Slayer assignment after inviting your partner to be your slayer partner by using an enchanted gem, slayer ring or slayer helmet on them. Take into consideration that both you and your partner need to have no task assigned to be able to partner up correctly, if you try to partner up whilst either one of you has a task it will not work.

There are a few restrictions to prevent players being given tasks that they should not get. You will only be given a slayer assignment that you have unlocked, have the Slayer and Combat level to complete and do not have blocked. If these criteria are not met then your partner will receive the task but you will not. You will be notified if this happens. Note that players that have unlocked TzTok-Jad and TzKal-Zuk will not be offered to slay him once instead of the number of TzHaar given if they are partnered.

Players can dismiss their slayer partner at any time by using an enchanted gem, slayer ring or slayer helm to open up the interface.

Ironman Mode players are unable to participate as a slayer partner.

Following several incidents of bug abuse, the slayer partner system was discontinued in an update on 12 June 2020.

On 12 December 2013, slayer reward points were released. Slayer reward points may be earned after having completed five tasks in a row without having a task changed by Turael. However, players may cancel a task by spending 30 points. Tip: You may want to use an expeditious bracelet to complete the first five tasks faster.

The rewards that can be bought with these points include unlocking new monsters as a Slayer task, a Slayer ring, the ability to combine all Slayer headgear into one item, the Slayer helmet, and even the ability to prevent players from being assigned a specific task forever.

Since getting good tasks worth keeping isn't guaranteed, it is suggested that players get their first four assignments from the Slayer master Turael, and then get any other assignments from higher masters like Duradel.

After getting five or more tasks in a row, Slayer masters will hand out points when players finish their tasks. The number of points varies as the difficulty of the Slayer master increases.

Every 10th, 50th, 100th, 250th, and 1,000th task, a special bonus is given to the player's slayer reward points, the bonuses also differ in points to each Slayer master. Whenever a task is done the player will be notified on what number task it is, and the total amount of points they have. This can help players plan to what slayer master they prefer to go next, to maximise the number of slayer reward points in the shortest amount of time.

After earning enough points, players will be able to buy rewards with earned points. (See main article for more details)

The Slayer helmet combines the stat boosting qualities of the Black mask with the protective slayer headgear facemask, nosepeg, earmuffs, reinforced goggles (should the player have finished A Porcine of Interest), and Spiny helmet, with the defence bonuses of a rune full helm, making it the best melee helmet option for slayers. This allows for monsters like aberrant spectres and dust devils to be killed while having the bonuses of the 15% Attack and Strength increase. Players can also imbue their slayer helmets via the Nightmare Zone. This gives all the bonuses of the slayer helmet, while boosting Ranged and Magic by 15% as well. The Slayer helmet's effects do not stack with a salve amulet or salve amulet (e) for a bonus on undead creatures, such as aberrant spectres. The Slayer helmet has a better bonus so it is recommended just to wear the Slayer helmet and an amulet of your choice (unless you have yet to unlock the ability to create the helmet and use the nose peg for example; then a salve amulet is recommended).

Players can boost the slayer skill in order to be able to kill higher-level slayer monsters. If the player's slayer skill drops below the threshold to kill a monster while fighting it, the player will stop attacking the monster and will be told they need higher slayer in order to attack it.

Upon completing any of the following quests, players may choose to allocate experience to Slayer. These rewards usually come in the form of items, such as lamps or books, and are independent of any experience rewards directly received for completing the quest.