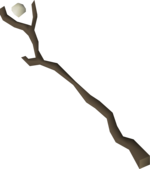 Upon enchanting the staff, it becomes untradeable and gains 2,500 charges. Once the charges run out, it will revert back to a regular Slayer's staff, and an additional Slayer's enchantment must be used on it.

. This stacks with other magic-damage boosts like the occult necklace, tormented bracelet, and black mask (i)/slayer helmet (i). Each cast of Magic Dart consumes 1 charge from the staff if the spell hits. If the spell does not hit, no charges will be consumed. Charges are also not consumed (and damage is not boosted) when casting Magic Dart on a monster that is not a current Slayer assignment.

A player enchants the slayer's staff.

The maximum hit dealt by the staff is dependent on the player's current Magic level, starting at 25 with level 75 Magic, up to a maximum of 31 at level 108 (with an imbued heart). Both magic damage bonuses and stat boosts will modify the max hit of the spell; likewise, stat-reductions will lower the damage. With an occult necklace equipped, the maximum hit possible is 34. With an occult necklace, an imbued god cape, a tormented bracelet, and an imbued slayer helmet on a Slayer task, the maximum hit possible is 41.