From Old School RuneScape Wiki
Jump to navigation Jump to search
The RuneScape Wiki also has an article on: rsw:Slayer reward point

Slayer reward points is a reward system that awards points after every completed Slayer task, from every Slayer master except Turael and Spria. The higher level the Slayer Master, the more points are received. Additionally, bonus points are awarded after every 10th, 50th, 100th, 250th, and 1000th completed task. Slayer reward points can be traded in to any Slayer master for various rewards. 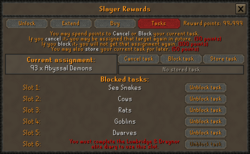 If a player is unsure of their current streak progress, they may ask Turael in Burthorpe or Spria in Draynor Village for a new assignment. They will tell the player how far into their streak they are, but only if the current assignment is not one that they would ordinarily give. Do not confirm the dialogue, as this will give players a new task from them and reset your task streak.

Slayer reward points can be spent to extend or block tasks, to purchase items useful for Slayer tasks, and on several unlocks such as quicker finishing blows, crafting Slayer equipment, and unlocking new tasks.