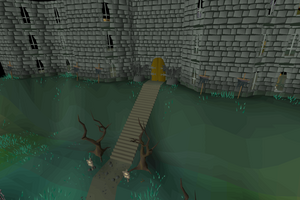 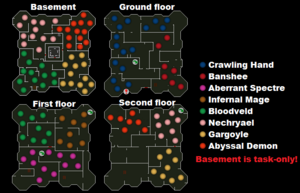 The Slayer Tower, also known as Viggora's Folly, is a tall granite tower that was built by Viggora, a follower of Zaros, during the Second Age.

The tower is located north-west of Canifis. There are three levels, each with increasingly dangerous Slayer monsters. All monsters within the building require a certain Slayer level to kill, the lowest being Crawling Hands at level 5, and the highest being Abyssal demons at level 85 Slayer.

Players may also earn bonus Slayer experience depending on their progress on the Morytania Diary. The amount of bonus experience gained starts at 2.5% with the easy task completed, increasing by 2.5% for each set complete, up to 10% with the elite tasks completed.

Note: Dwarf Multicannon cannot be used here. If attempted, you receive the message, "Dark forces are preventing the dwarven construction from working."

During the Second Age, the tower's construction was overseen by General Viggora, who had switched sides to Zamorak following his usurping of Zaros. Viggora oversaw construction of the tower, though its actual purpose remained unknown. It was constructed with Zamorakian magic, and the tower itself was very large, full of large rooms, winding passageways decorated with assorted items. The most important of these were the gargoyles, which also included two unique gargoyle statues (who a Dorgeshuun assistant would call Dusk and Dawn due to how they were placed) at the rooftop with a Cloister Bell, intended to be rung during times of conflict. However, an unknown incident soon caused the tower to be renamed as Viggora's Folly, and it was eventually abandoned.

During the Third Age, at the time of the God Wars, Bandos sent the ourg general Snaarldor along with a group of Bandosians to the tower, desiring stronger soldiers after having been disappointed by the frailness of his goblins. Snaarldor took along Bandosian metal along with a tourmaline core and made his way to the tower's rooftop, performing a ritual at high noon with the core and metal, causing all of the gargoyle statues to reanimate. The two gargoyle statues at the top of the tower looked at Snaarldor, and Snaarldor believed he had won their loyalty and issued commands to attack Bandos's enemies, including Zamorak.

As the tower was built with Zamorakian magic, the gargoyles attacked Snaarldor instead, with Dusk battling the ourg general mid-air. Snaarldor chopped off one of Dusk's wings before the gargoyle dropped him into the swamp below, and upon recovering, Snaarldor immediately ordered his remaining forces to retreat. The two gargoyle guardians then returned to their positions on their plinths, and the rooftop entrance would soon be locked, either by the Bandosians or future inhabitants.

A group of infernal magi are based in the tower, along with various other inhabitants, though their relationship to the tower is unknown.

The basement can be accessed through a ladder on the ground floor, near the entrance. Monsters here can only be killed on a Slayer task. Raulyn will stop players who attempt to attack monsters that are not on their slayer task.

The basement is dimly lit, although a light source is not required to enter.

The ground floor[UK]1st floor[US] is inhabited by only Crawling Hands in the west wing and part of the east wing. Banshees are found in the east part of the wing.

Near a group of crawling hands is a spiked chain requiring 61 Agility (can be boosted) to use. Using this spike will take the player to the middle floor, where the Aberrant spectres are located. DO NOT climb up if you do not have a nosepeg or Slayer helmet, or your stats will be drained by the spectres.

The 2nd floor[UK]3rd floor[US] is where the strongest monsters in the tower reside. Gargoyles inhabit the south-eastern wing, nechryael in the north-eastern and abyssal demons in the north-western wings.

A spiked chain can be found at the nechryael room which takes players down to the middle floor, where the infernal mages reside. This requires 71 Agility (can be boosted).