From Old School RuneScape Wiki
(Redirected from Sled (unwaxed))
Jump to navigation Jump to search
Not to be confused with Sled (2020 Christmas event).
The RuneScape Wiki also has an article on: rsw:Sled
Sled? (edit)UnwaxedWaxed? (edit)? (edit)

The sled is a device obtained and used during the Troll Romance quest. To make the sled, players must talk to Dunstan, who is to the east of Burthorpe Castle, in the house with the anvil.

Note: It is not possible to obtain the sled before starting the Troll Romance quest. 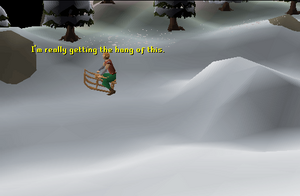 A player on a sled, going off a jump

First, the player must speak to Dunstan to make the sled. Players must then use the swamp tar with the bucket of wax. The wax will then automatically go into their cake tin. Players should then use the wax with the made sled.

It is equipped in order to sled down Trollweiss during and after Troll Romance to get from the peak to near the southern base where the rare Trollweiss flower grows.

If lost, a new sled can be obtained from Dunstan in exchange for a maple or yew log (bring both), a rope and an iron bar. This will however be unwaxed and must be waxed again before use.

The sled is needed to access the Trollweiss mountain which is required by two elite clue scrolls, and one hard clue scroll.

If you teleport away while using sled and you have full inventory you will drop it and have to get a new one! 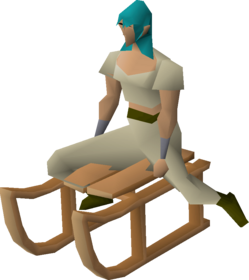