From Old School RuneScape Wiki
Jump to navigation Jump to search
Not to be confused with Sleeping Giant.

Sleeping Giants is a quest accompanying the Giants' Foundry minigame. The player assists Kovac the giant in investigating an ancient workshop beneath the Giants' Plateau seemingly built by giants, for giants.

{"requirements":"*<span class=\"scp\" data-skill=\"Smithing\" data-level=\"15\">[[File:Smithing icon.png|21x21px|link=Smithing|alt=Smithing]] 15 [[Smithing]]</span> <sup>(<span title=\"This requirement is not boostable\" style=\"cursor:help; text-decoration: underline dotted;\">not boostable</span>)</sup>","desc":"Ahh, giants. We all know them. Enormous humanoids hanging about Gielinor, simply minding their own business until some adventurer or another comes along to beat them up.\n\nBut how much do we really know about these giants? What do they think about? Where did they come from? Would they enjoy making massive swords in some kind of… gargantuan workshop?\n\nAll these questions, and more, will be answered in the quest Sleeping Giants! You’ll help Kovac, a friendly giant who’s discovered an ancient forge built to his giant-size proportions!","difficulty":"Intermediate","kills":"","name":"Sleeping Giants","start":"Speak to [[Kovac]] at the [[Giants' Plateau]], east of [[Al Kharid]].","length":"Short","ironman":"[[File:Ultimate_ironman_chat_badge.png]] 20 empty inventory spaces needed to search a crate.","items":"* 3 [[oak logs]]\n* 1 [[wool]] ([[ball of wool]] will '''not''' work)\n* 10 [[nails]]\n* [[Hammer]] or [[Imcando hammer]] (Other types of hammers will not work)\n* [[Chisel]]\n* 1 [[bucket of water]] (Obtainable during quest) or [[ice gloves]]"}

What is this? A workshop for giants?[edit | edit source] 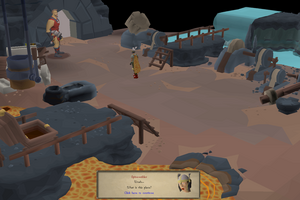 Kovac and the player enter the Giants' Foundry.

Make your way to the Giants' Plateau east of Al Kharid. The quickest way to reach there is to teleport to Al Kharid via an amulet of glory and head east from the palace. Past the Hill Giants, a singular Hill Giant with a "Strike" option rather than an "Attack" option can be seen by a giant anvil. Attempt to strike the Hill Giant, and it will ask you to stop, requesting your help. Accept his request to start the quest.

The Hill Giant, whose name is Kovac, will ask you to accompany him to the cave next to him. A cutscene will play, showing a workshop too big for regular-sized people to use. This is the Giants' Foundry, where giants of ages past once forged weapons. Kovac wishes to restore the foundry to forge giant weapons to help his kin remember how civilised their race once was.

You must now repair the various features of the foundry that have been dilapidated. If you forgot to bring any of the required items, a big chest can be found which accesses your bank. 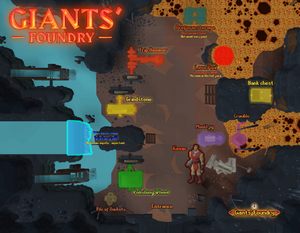 An overview of the features in the Giants' Foundry.

Speak to Kovac once you've repaired the aforementioned objects. He will now ask that you make a sword for his old friend; this part of the quest acts as an interactive tutorial for the Giants' Foundry minigame.

Search the crate near the cave exit for an assortment of bronze and iron items, and use them on the crucible. Once it is full, speak to Kovac again, and he will tell you to set up the mould for the sword's forte, blade, and tip which match the commission.

Once you've got a fitting mould set, speak to Kovac and pour the molten metal from the crucible into the mould jig. With no weapon and shield equipped, use a bucket of water to cool the sword and obtain the preform. An empty bucket can be taken from the pile next to the polishing wheel, and filled by using the bucket on the waterfall. Alternatively, a bucket of water is not needed if you have ice gloves equipped.

Now, you must refine the preform into a quality giant sword:

Once you've completed the sword, speak to Kovac again. He will reveal that the sword was made for his old friend Obor, who resides in the Edgeville Dungeon. 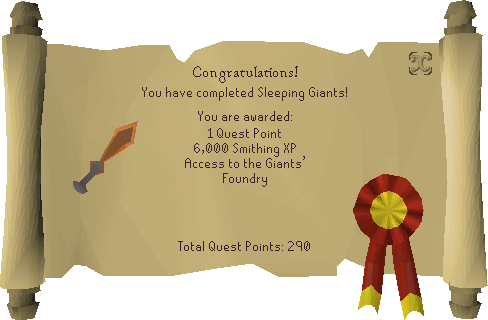