Slepe (pronounced "sleep") is a small coastal town which occupies an area east of Meiyerditch and Darkmeyer. The town is home to the sleeper plague, which causes infected people to fall into a deep eternal sleep, giving the town its name.

The town was originally founded by Lady Phosani and her band of former Saradominist Justiciars who abandoned Saradomin's cause following Lowerniel Drakan's conquest of the area then known as Hallowvale. Phosani and the others offered their troops and the townspeople as tithes and sacrifices to Lowerniel, who accepted their offer. In return, he allowed them the land east of Darkmeyer. Phosani and the others created a small hermitage and grew a Zamorakian sisterhood, attracting more like-minded human followers in the process.

Due to the town's fealty to Lowerniel, Slepe is the only human settlement in Morytania whose inhabitants voluntarily allow their blood to be tithed.

Eventually, Otrava discovered the Elixir of Everlasting, a potion said to extend the lifespan of those who drank it. Phosani and the others, who wished to live as long as their vampyre overlords, drank the potion, unaware of its deadly side effect at the time. With this potion, the members of the Sisterhood oversaw the construction of an underground sanctuary due to their revitalized youth.

The deadly side effect of the potion kicked in sometime afterwards. Seeing the danger the potion caused, the inhabitants of Slepe moved the afflicted to the sanctuary and locked them inside for their own safety. The town, called Sleep at the time, was soon changed to Slepe in an unknown incident. The locals dubbed the disease as the Sleeper Plague, but due to the precautions set in place by Phosani, there appeared to be no further incidents until Year 169 of the Fifth Age, when the Sleeper Plague was recreated by the vampyre Kroy and his master Damien Leucurte to gather more blood to meet the nobility's demand for blood. The locals blamed it on the Painted One, who was actually a traveler from Varlamore, and killed him in the mistaken belief that it would end the plague. Kroy and Damien were killed at the same time, which ended further infections.

However, more than enough damage had been done, as the locals were unable to cure those afflicted, and in addition to this, a malevolent entity broke into the underground sanctuary to feast on those afflicted by the Sleeper Plague.

The quickest methods of reaching Slepe are as follows:

The town's church is Zamorakian, and currently houses Nemishka and Lady Crombwick, who both are infected with the sleeper plague and are under the care of Sister Sevi and Sister Toen, respectively.

On the 2nd floor[UK]3rd floor[US], players can take a book named explosive discovery. A chest is also found here, but can only be opened with the old key.

On the church's roof, several chaos druids and chaos druid warriors can be found.

The Rat & Bat is a small pub run by Carl. He only sells bloody bracers to players, which, according to Carl, are made with local ingredients.

Under the town is the Sisterhood Sanctuary, accessible by climbing down the stairs in the small house next to the church.

The Crombwick Manor is the residence of Lord Crombwick. As the entrances to the manor are locked, it is only accessible via the ladder in Kroy's laboratory in the Sisterhood Sanctuary. It has been invaded by Damien Leucurte, vampyre juveniles and vyrewatch, and as a result appears messy. 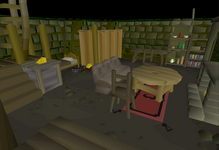 The basement of the house directly west of the Sisterhood Sanctuary entrance. 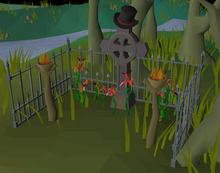