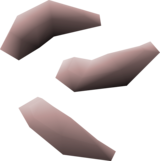 Sluglings are a quest item used during the Rum Deal quest. They are believed to be young sea slugs, as confirmed by Captain Braindeath.

Players catch sluglings by using a fishbowl and net in a fishing spot on Braindeath Island. They are one of the ingredients of the unsanitary swill that the player must make during the quest. Players are not awarded any fishing experience when catching sluglings.

After the quest, any sluglings remaining in inventory will disappear, and an attempt to fish for sluglings triggers the response, "You have no need to do that any more."

They appear to have mind-controlling properties. Using them on Captain Braindeath triggers dialogue where the player says the sluglings are telling them to do "bad things", prompting Braindeath to stomp on them to release the player from their hypnotic trance.

For an exhaustive list of all known sources for this item, see here (include RDT).
Retrieved from ‘https://oldschool.runescape.wiki/w/Sluglings?oldid=14017185’
Categories:
Hidden category: