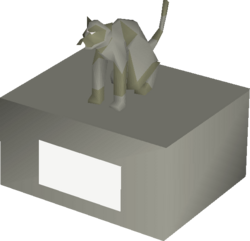 The small statue can be built in the Statue space of the Chapel in a player-owned house. It requires 49 Construction to build and when built, it gives 40 experience. The player must have a hammer and a saw in their inventory to build it.

The statue will align to the god that your Icon represents. The default god (no icon) is Saradomin.