From Old School RuneScape Wiki
Jump to navigation Jump to search
The RuneScape Wiki also has an article on: rsw:Smoke Dungeon
Not to be confused with Smoke Devil Dungeon.

Note: The smoke in this dungeon cannot kill you, but the creatures inside it can.

The Smoke Dungeon is a winding tunnel underneath the Kharidian Desert. To reach it, players must climb down the smokey well. It is visited during the Desert Treasure (must have progressed until beginning the search for the four diamonds to enter) quest to obtain the smoke diamond from Fareed. While in the dungeon, the player must wear a facemask, Slayer helmet, or Slayer helmet (i) to protect themselves from the smoke. A gas mask from the Plague City quest will also serve as adequate protection. However, the dust devils inside the dungeon will still rapidly drain the player's stats despite the gas mask's protection. Remaining in the dungeon without protection will cause players to receive 20 damage every 12 seconds (20 ticks), though this cannot reduce the player's Hitpoints below 1.

The Smoke Dungeon is one of two locations that contain dust devils, which have an exceedingly rare chance to drop the dragon chainbody. Dust devils can be killed with Ranged, Magic, or attacked using a Melee weapon such as a halberd. Weapons such as the aforementioned may prove useful when killing dust devils, as they allow for safespots to be used. Dust devils can also be barraged or bursted on a Slayer task for very fast slayer experience in the task-only area. The area also contains fire giants; other monsters that may be found in the dungeon include pyrefiends and fire elementals.

There are two safespots for ranging fire giants. 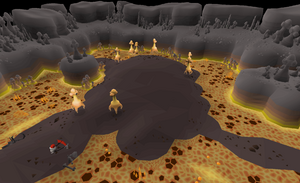