The smoke devil is a mutated version of a dust devil, found at the Smoke Devil Dungeon. These require a minimum of 93 Slayer and an active Slayer task to be harmed. A Slayer helmet, Slayer helmet (i), or a Facemask is required to kill these. This monster, along with its boss variant and superior variant, are the only monsters to drop the Occult necklace.

Smoke devils reside in a multi-combat area, so players can burst/barrage or use chinchompas on them, though only the former is particularly effective. Given the fact that the smoke devil chamber is very large, bringing a cannon is recommended to get their attention. The various remains that litter the chamber act as "walls", so smoke devils can be stacked on top of one another for bursting/barraging quickly by hiding behind a pile of remains. 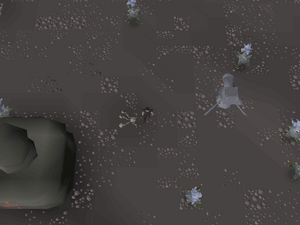 Cannon location in the dungeon.

When fighting them, using Protect from Missiles will negate their attacks.

Although smoke devils are mutated dust devils, they do not count for dust devil tasks.

Drop rates estimated based on 305,977 samples from the Drop Rate Project, unless otherwise cited.