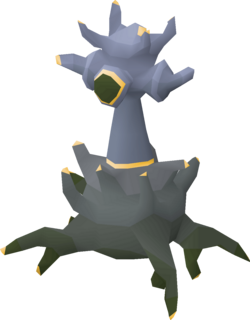 Smoke devils, are a slayer monster requiring 93 Slayer to kill. When using Ice Barrage and a cannon, smoke devils can provide high Slayer experience rates of up to 180,000 per hour, depending on how well the player can not lose any time attacking during grouping them and collecting their loot, but a rate of 120,000 is more realistic for a player paying only moderate attention. Valuable common drops like the rune chainbody as well as fire and air battlestaves generally compensate the rune and cannonball costs, and the rarer occult necklace drops can provide a net profit.

Bank at Castle Wars then run south-west of the building, where the entrance to the Smoke Devil Dungeon. Alternatively, use a bank of your choice and use the fairy ring bkp to teleport south-west of the dungeon. Run to centre of the room to the cannon spot.

The smoke devils attack only with a ranged attack. Protect from Ranged will prevent all damage.

The smoke devils are located in a smoky environment. Players not wearing a facemask or slayer helmet will take 10 damage occasionally while in the dungeon, and attacks from the smoke devils will deal very rapid damage that also drain stats. When using the slayer helmet to check how many kills you have left on the task, take care not to misclick on unequipping the helmet; this can quickly lead to a death with smoke devils attacking you. This also applies on not misclicking rune full helms in the inventory that smoke devils drop as loot. 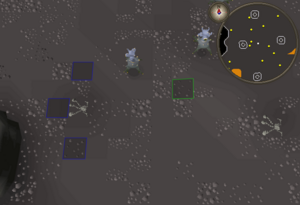 The cannon's optimal placement is on the tile marked with green. The tiles marked with blue around the cluster of bones can be used to group smoke devils from each direction.

Smoke devils should be grouped to maximise barrage hits. Place the cannon in the centre of the room to get them attacking, then run around each side of the skeleton to the west to group up the smoke devils.

It is also possible to lure smoke devils with a ranged weapon, such as a magic shortbow, although this results in lower experience rates and is typically only worth for some ironman accounts, particularly ultimate ironmen.

Autocasting spells has 1 tick delay between player clicking a target and the spell being cast. To achieve maximum experience rates the player should manually cast every spell from the spellbook after moving. This way the spell is cast immediately, saving a lot of time in the long run.

This is the best-in-slot available equipment for maging smoke devils. Unlike dust devils, smoke devils have some magic defence, so gear that provides magic accuracy is beneficial. See the table below for an overview of equipment alternatives in case this setup is not accessible or too expensive.