Snake weed is a herb found by searching a marshy jungle vine. It is dropped in grimy form by Jogres and Tribesmen. It is a secondary ingredient in herblore used with rogue's purse to make Relicym's balm potion. It is also used as second ingredient to make sanfew serum. 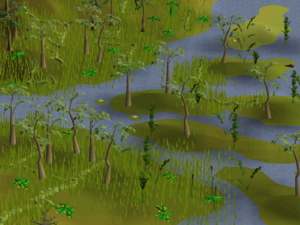 This herb is needed for the Zogre Flesh Eaters quest and Legends' Quest, therefore it is wise to take extras during Jungle Potion.

Twenty marshy jungle vines are found south-west of Tai Bwo Wannai in west Karamja. Located near the coast, just north of the Horned Graahk. Near fairy ring code CKR. They are bright green in colour with yellow spikes around its vines. The average time it takes to harvest a single snake weed decreases with higher herblore levels. At level 1 you have a 4% chance per roll, and at level 99 you have 86% chance.[1]

No drop sources found. To force an update, click here.