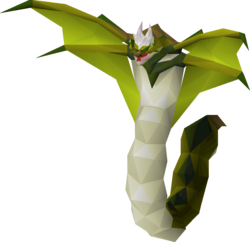 Snakelings are summoned during the fight with Zulrah.

When spawned, one of two different snakelings will appear; a melee-using snakeling, and a magic-using snakeling. The magic snakelings shoot out venom. A ring of recoil is strongly recommended to kill them, as they can hit up to 15 and have only one hitpoint. Snakelings, like Zulrah, can envenom the player.

Snakelings will automatically die off if it has persisted too long, regardless if they are in combat with the player or not, or if Zulrah is killed.

They were created during the Dragonkin Conflicts by an unnamed Dragonkin, who viewed them as "vorkaths" — a Dragonkin term for failure or weakling — though one of these eventually matured into Zulrah. Their examine text indicates that Zulrah spawned them, though it remains unknown if any of the original snakelings still exist.