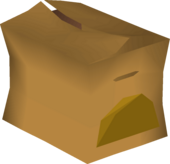 Originally, soft clay packs could be traded, and therefore turned into banknotes. This allowed players to purchase soft clay packs, and sell them back to Prospector Percy to quickly gain gold nuggets and to buy the Prospector kit. While this was accepted at first, it inadvertently provided a quick shortcut for a task in the hard Falador Diary. Although this was first accepted by Jagex Moderators as an "unforeseen feature"[1], but packs were changed to become untradeable in an update on 9 April 2015.

Any player who had a bank note version of the Soft clay pack was given this item as a replacement, which is a unique stackable variant of the standard pack. They can no longer be obtained, but remain in the inventories of any player who had them before, making them a rare example of a discontinued item in Old School RuneScape.