The Sophanem Dungeon consists of a series of tunnels under Sophanem which are filled with a variety of scarab monsters. It is a dangerous dungeon, especially on the third level, with many monsters over level 100, which all use different attack styles, making it hard to protect-pray from them. Also, the monsters can roam all over the place and they all have high max-hits, which can kill a weak player in a matter of seconds. 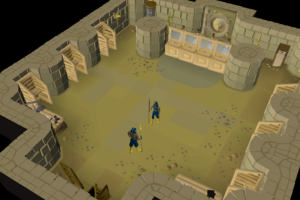 The first level contains Sophanem's bank, which can only be used if the Contact! quest has been completed. Players will not be able to access the second and third levels of the dungeon until they have started the Contact! quest. Here, you can buy an unlit torch and a tinderbox from the Sophanem guards for 200gp and 50gp respectively, although this is not necessarily recommended, as both of these items are much cheaper at other sources. A light source is required for the lower floors.

In order to enter this level, players must bring a light source with them, or risk getting swarmed over with tiny insects.

This section contains Scarab mages and Locust riders, which can do moderate to high damage on a player who is unprepared. It is quite dangerous due to these monsters, plus some floor traps, wall traps, trapdoors and wall crushers, but not as deadly as the third floor (see below).

Probably the most dangerous things on the second level are the trapdoors. Some of them are able to be spotted (look for the sandy circle on the ground; that's a trapdoor), but others are well-hidden and can easily outsmart players. If you fall down a trapdoor, you will land on the third floor, your light source will get extinguished, and dying is almost certain due to the darkness and the aggressive scarabs. Be very careful. 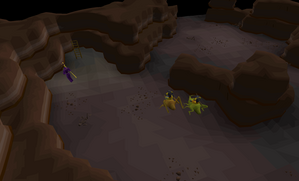 The most dangerous part of the dungeon.

In addition to traps doors, a player can voluntarily enter the lower level by any one of the eight ladders. Using the ladders marked 2 and 6 on the map provides a fast, but deadly, route to the end of the dungeon's maze. It's an alternative for players that are unable to pass through traps on second floor without damage because of low Agility or Thieving levels, however, they will encounter higher damage from NPCs which certainly want them dead.

The monsters in this section are level 100+ and they are ruthless. Prepare for a nasty beating on this floor. You can pray from either melee, ranged or magic, but all of the attack styles are present here, making it hard regardless of protection prayers. It is very easy to die here.

Monsters in the dungeon[edit | edit source]