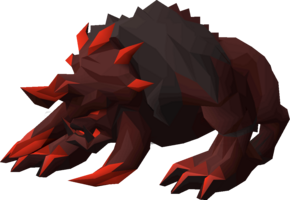 Sotetseg is the fourth encounter in the Theatre of Blood. It is a dark beast that has been corrupted through Haemalchemy. 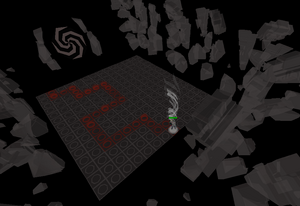 A player dragged into the Shadow Realm by Sotetseg.

Sotetseg will also occasionally fire a slow-moving large red ball at a single player, which can do up to 121 damage when it hits the player. If other players are standing within a 3×3 area of the targeted player, the damage will be dispersed among them. This large red ball is tick-eatable.

At 66.6% and 33.3% hitpoints, Sotetseg will choose a single player and transport them into a shadow realm. The player must follow the red path on the tiled ground and enter the portal at the end to return to the arena. The transported player will also constantly take hits of 1-3 damage while in the realm every few seconds. The players in the arena must also follow the same path, however, they will only be able to see the current location of the transported player, denoted by a red glow on the tiled ground. Concurrently, players in the arena will also be chased by a red vortex that will deal damage to the whole party if intercepted.

Although it is similar in appearance to a dark beast, it is not affected by a Slayer task.

Drop rates estimated based on 6,800 kills from the Drop Rate Project, unless otherwise cited.