From Old School RuneScape Wiki
Jump to navigation Jump to search
The RuneScape Wiki also has an article on: rsw:Soul Wars
For the music track, see Soul Wars (music track).

Soul Wars is a members-only team minigame, a remake of the original Soul Wars released in RuneScape on 10 February 2009. In Soul Wars, two opposing teams compete against each other to gather soul fragments and offer them to the Soul Obelisk in order to weaken, and ultimately defeat, each other's Avatars through combat. Each game lasts up to 15 minutes.

To get to Soul Wars, one must enter the Soul Wars portal in Edgeville or the Ferox Enclave Dungeon. It is located south-west of the bank, and west of the abandoned mausoleum. After going through the portal, the player will arrive at Nomad's camp on the Isle of Souls, where players can exchange Zeal for rewards, learn how to play Soul Wars, or join one of two teams to play Soul Wars. The northern region of the lobby area is a safe area from player versus player combat, while the southern region is unsafe and allows PvP combat on PvP worlds.

Soul Wars can be played on any worlds, but dedicated worlds are more likely to be active.

Players require a total level of 500 and a combat level of 40 to play Soul Wars.

To join a team, the player must have completed the Soul Wars tutorial once on any world by talking to Nomad. The player may not bring restricted items such as food, potions, capes, followers and non-combat items with them to the tutorial. The player is also not allowed to enter the tutorial while poisoned, envenomed or diseased. Logging out or dying (a safe death) during the tutorial will take the player back to the Soul Wars lobby. Like the minigame itself, the tutorial is a PvP-enabled area on PvP worlds.

The western lobby is used for regular games. Each team must have at least ten players. Once enough players are in the lobby, a game will begin in two minutes. A game will automatically begin when the lobby has 120 players in them. Teams are balanced according to combat level.

The eastern lobby is reserved for clan games. Only captains and above may accept a challenge. Zeal earned is limited to 30 per game in this mode.

In order to reduce the damage reduction percentage, players will have to gather soul fragments as loot from monsters wandering around the minigame area, and offer them to the Soul Obelisk. Control over the Soul Obelisk is dependent on which team has more players within its vicinity; the team that does not have control of the obelisk will find that sacrificing soul fragments there will only be worth one-third of the contribution.

Players can also gather bones and bury them at a graveyard to increase the percentage of their Avatar's damage reduction. If the bones are buried in a graveyard in which the team that does not have control over, it will only be worth one-third of the contribution. If a team's Avatar's health is low, or the other team has control of the Soul Obelisk, then more players are needed to gather and bury bones to increase the damage reduction percentage of their Avatar. Players can also stand near the Soul Obelisk to assist in its capture.

The capes worn in Soul Wars act like team capes, meaning that attacking is the default left-click option on any player of an opposing team, which is useful when one does not target a certain player and is in a crowded place such as the Soul Obelisk. The capes worn cannot be unequipped during a game and players attempting to attack teammates are disallowed from doing so.

Players will have to maintain their activity bar in order to receive Zeal Tokens, the minigame's reward currency. The activity bar entirely depletes after about three minutes of inactivity. A player that remains completely idle and lets their activity bar deplete will be kicked from the game and forced to wait 10 minutes before they can join another game of Soul Wars.

Players can maintain their activity bar and earn Zeal Tokens by: 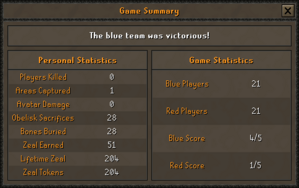 The reward interface at the end of a game.

Players can speak to Nomad to redeem their Zeal Tokens for rewards. Possible rewards include experience in any combat skill that's at least level 30, equipment imbues, blighted items, or unique loot. Nomad can upgrade Soul Wars capes with ammunition saving effects when Ava's devices (or their max cape variants) are used on him. 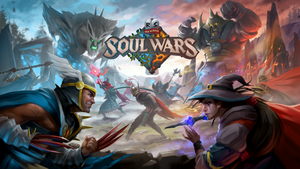 Promotional artwork for the minigame.

Game balancing was stated to be a big problem as well, particularly when a team would rush to a large lead early in the game, or when a team has a lot of its players leave (these two things were quite often linked to one another). To address these issues, the following were implemented:

Lastly, Slayer was central to the gameplay of the original minigame. A number of changes were made to remove the skill's presence in Old School's Soul Wars: