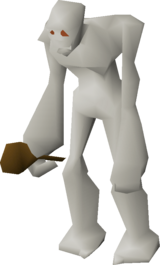 Soulless are soul-less humans found in the Underground Pass. They do not have to be killed, but can be killed for bones.

The Soulless were originally brave adventurers (possibly heroes found in Ardougne) that had attempted to purify the Well of Voyage from the quest Regicide. However, the voice of Iban drove them insane. Koftik fell for this "voice" during Underground Pass.

Apparently, the victims of Iban are all locked into cages, being subjected to Iban's voice until they deteriorate to become the half-soulless. They are seen as still visibly human, rocking back and forth with extremely pale skin. From here, they deteriorate further into "Soulless", though we don't actually see this process.

Soulless are aggressive to low/medium levelled players and retreat when they have low health. They drop nothing beside bones.

They are found in the Underground Pass. They dwell at the bottom of the chasm, below the cages where the Half-soulless are kept and found around Iban's temple.

Soulless can be used for training as they have high Hitpoints and very low accuracy, low defence as well as low strength. It is quite easy to dispatch one in one blow. The fact that they will often retreat makes them perfect for players using a multicannon as the cannon will shoot at all soulless in the area without you being attacked by other soulless and having combat interrupted causing the cannon to target the enemy attacking you. The downside of this method is the fact that they reside in a remote location and they drop nothing but bones.