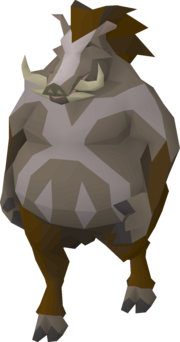 A sourhog is a boar-like monster introduced in A Porcine of Interest. It requires reinforced goggles to kill, or a Slayer helmet after the quest. If no protection is used the caustic saliva they spit will burn the player's eyes, draining the player's current Attack and Defence by 90% and cause 20-30 damage each hit accompanied by the player exclaiming Argh! My eyes!.

According to Spria, the sourhog was created when two farmers competed in a competition each year, with the same farmer winning each year. The other farmer, who was jealous of his rival, hired a dark wizard to alter one of his pigs, turning it into the Sourhog. This sourhog escaped and successfully bred more of its own kind. Sourhogs prefer to live in underground caves and in primitive tribes.

Drop rates estimated based on 47,451 kills from the Drop Rate Project, unless otherwise cited.

There is a 24/110 chance of rolling the uncommon seed drop table.