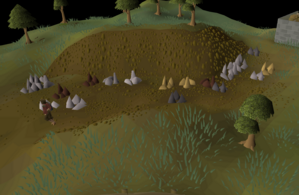 The South-west Varrock mine (also called West Varrock Mine) is a low-medium level mine located outside the south-western corner of Varrock. The mine contains 8 tin rocks, 3 iron rocks, 3 silver rocks, and 3 clay rocks, along with some other rocks that have no ores.

Due to its close proximity to Varrock West Bank and the Grand Exchange, this mine is suitable for mining large amounts of iron, clay or other ores. However, as this is one of the few silver mining sites on free-to-play, it is often crowded with higher-level miners.

An aggressive level-6 mugger hangs around the mine and will attack players who are 12 Combat and under. Thus, 13 Combat or more is recommended in order for the mugger to be tolerant.