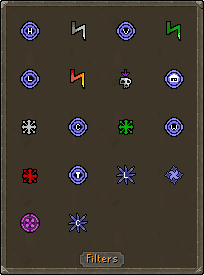 Once a player checks or unchecks the desired filter, tapping the Filters button again will display the filtered interface. On Old School RuneScape Mobile, if enough spells are filtered out, the spell icons will become enlarged to make them easier to tap.

Players who wish to change their currently active spellbook have several options:

If players are on the Lunar spellbook, they can cast Spellbook Swap, to be able to swap to another spellbook for one cast of a spell.

The standard spellbook is a set of modern spells available to all players, being unlocked by default upon character creation. Having the most spells of any spellbook, standard spells make use of all runes except astral.

The Arceuus spellbook is a set of spells utilised by Citizens of Arceuus, available to players upon gaining 60% favour with Arceuus in Great Kourend. Like the standard spellbook, it has a variety of offensive and utility spells at its disposal, unlike the Lunar spellbook, which is primarily focused on utility spells, and the Ancient Magicks, which is heavily combat-oriented.

Making extensive use of blood, nature and soul runes, the spellbook makes use of reanimation spells used in prayer training, and possesses an array of teleportation spells to the mainland, which primarily teleports players to locations associated with death, such as graveyards and dungeons with undead. Alongside the reanimation and teleport spells, a larger set of combat and utility spells are accessible to players who have completed the quest A Kingdom Divided.

Ancient Magicks are a set of Zarosian spells available to players upon completion of the quest Desert Treasure. Unlike the Lunar spellbook, which primarily focuses on utility spells, and the standard spellbook, which is a mixture of combat and utility spells, the Ancient Magicks is significantly combat-oriented, including some of the most powerful combat spells in the game.

Having far fewer spells than the other spellbooks, many spells of the Ancient Magicks are very rune-intensive and require expensive runes such as death and blood runes. Owing to their power (a minimum of 50 Magic is needed to even access the spellbook), Ancient Magick spells are popular in player-versus-player activities.

The Lunar spellbook is a set of spells utilised by people of the Moon Clan, available to players upon completion of the quest Lunar Diplomacy. Making extensive use of astral runes, the spellbook is primarily oriented towards utility spells and combat-support spells, reducing or eliminating the need for certain items and equipment to carry out certain tasks, in contrast to the combat-heavy Ancient Magicks and the varied spell types of the standard and Arceuus spellbooks.

A larger set of spells are accessible to players who have completed the quest Dream Mentor, while two spells, Tan Leather and Recharge Dragonstone, are unlocked by completing the Hard Fremennik Diary.