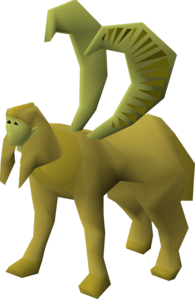 The Sphinx is a mysterious feline creature found in Sophanem. She is involved in several quests involving cats.

As the Sphinx puts it, "I am an agent of neither good nor evil. I am unconcerned with the plight of mankind and their petty wars and beliefs." This is likely because the Sphinx is the guardian of feline kind.

The Devourer is not a friend of cats or Sphinxes.

The Sphinx is involved in three quests: