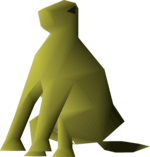 The Sphinx's token is a quest item obtained from the Sphinx in Sophanem during the Icthlarin's Little Helper quest.

Upon asking for help from the Sphinx, she will give you the token and direct you to talk to the High Priest. Initially when speaking to the priest, he wishes to not communicate with you. Although when the player presents the token, the priest surprisingly says that he will listen to the player, if they have somehow received the Sphinx's approval. He then takes the token and the player is free to talk to him at any time without approval.

If the player manages to lose the token, they can ask the Sphinx for another one as long as the player hasn't given one to the high priest.