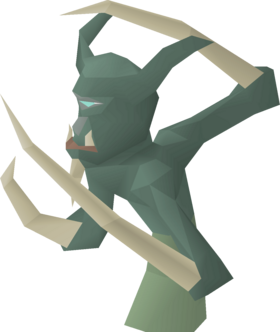 Spinolyps are small, Dagannoth-like creatures found in the deepest sublevel of Waterbirth Island Dungeon in the same room as the Dagannoth Kings. It is recommended to bring some form of antipoison as they are able to poison. Their Magic attack takes the appearance of Water Strike and is considered ranged-based magic as it rolls against the player's Ranged defence.[1] As such, it will always be more beneficial to use a guthan's platebody over a karil's leathertop, for example. A successful hit by their Magic attack also drains 1 prayer point; this prayer drain effect is halved when using a spectral spirit shield.[2] Their ranged attack is poisonous and resembles the one used by Ranged-using Dagannoth. Each attack can hit up to 10.

Spinolyps will turn into level 34 Suspicious water on occasion, and become non-attackable. If the water is adjacent to a player it may deal a rapid inaccurate melee attack. After a while they will emerge again as Spinolyps. If they somehow die as Suspicious water (e.g. venom, projectile fired before transforming), then bones will be dropped.

They never become tolerant to the player.