From Old School RuneScape Wiki
Jump to navigation Jump to search
The RuneScape Wiki also has an article on: rsw:Spirits of the Elid

Spirits of the Elid is a quest in which you must assist the villagers of Nardah in restoring water to their town, which has all but disappeared. The villagers believe themselves to be the victim of a curse, and you must discover the truth of what has happened to the village's water sources.

To start this quest, head to Nardah and speak to Awusah the Mayor. He will tell you that there is a curse on the town, and there is no more water available to the people anymore.

Go to the house just north of the mayor's house and speak to Ghaslor the Elder. He will give you a ballad. Do not bank/drop the ballad as it is needed to complete the quest.

Next, go west and speak to Shiratti the Custodian. After speaking to Shiratti, search the cupboards west in the building and use your needle and thread on the torn robes (remember to get both the top and bottom). You will turn them into robes of elidinis. Use Telekinetic Grab to steal the ancestral key from the enclosed area. 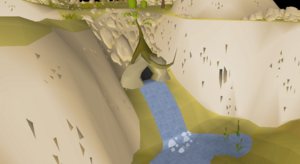 The next location is the waterfall at the source of the River Elid, on the east bank. To get there, either:

When you reach the dungeon entrance, use your rope on the root above the waterfall to enter.

While wearing the Robes of Elidinis, open the door with the ancestral key in your inventory. If you are not wearing the robes, or do not have the ballad, your character will ask what they could possibly have forgotten.

Once you're inside, ignore the door to the north; head east a short ways to where you'll see three doors. Upon attempting to open each door, you'll be attacked by one of three coloured level-75 golems, which can only be defeated by one type of attack style (Crush/Slash/Stab). A Spear can use all of these attack styles in one slot, and a pickaxe (if decent material) can use Stab / Crush. It is also possible to fight the black golem (Crush) unarmed, but this is only recommended if your stats are high (70+) due to its high Defence level. After defeating them, the door they protected will open. Enter the room and solve the puzzle to clear the water channel:

If you attempt to open the door before the golem has finished its death animation, another golem will spawn. 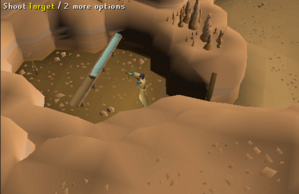 After you clear all three channels, go north through the remaining door, walk around the lake, and talk to the spirits, Nirrie, Tirrie and Hallak. They'll tell you to recover the sacred Statue of Elidinis and return it to the shrine in Nardah to break the curse.

Go to Nardah and talk to the mayor again. He will tell you that they threw the statue down a crevice west of town. While you're here, take the mayor's shoes from beside the door and use your knife on them to remove their soles. (The mayor won't let you if you're too close to him.)

The crevice, west of Nardah.

Go west from the general store in Nardah until you come to the crevice and use a rope on it. You need a light source, or else you'll be eaten alive by tiny bugs. Talk to the genie (the evil brother of the random event). He will tell you to get the mayor's sole in exchange for the statue. Give the soles to him to get the statue back.

Finally, take the statue to the shrine back in town (the building you stole the key in) and place it on the stand. 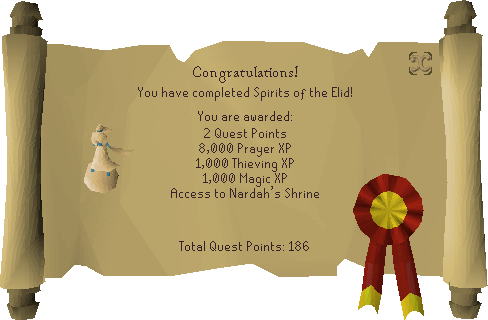 Completion of Spirits of the Elid is required for the following: