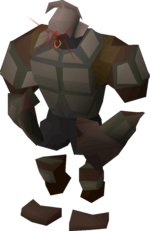 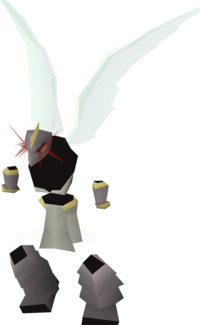 The Spiritual mage is a potent Magic Slayer monster found in the God Wars Dungeon that can easily kill low-level players. Protect from Magic and high prayer bonus is highly recommended for anyone wanting to 'camp' these monsters. Like all monsters in the God Wars Dungeon, they are aggressive to any players that do not wear items showing loyalty to their god. Spiritual mages require 83 Slayer to kill. Completion of Death Plateau is required before Spiritual creatures can be assigned as a Slayer task[1]. Just like Spiritual rangers and Spiritual warriors, which require 63 and 68 Slayer respectively, there are spiritual mages for each god.

Saradominist and Zamorakian mages are frequently targeted as they have the lowest combat stats of all the mages, including extremely poor defensive bonuses. Saradominist mages also have very high aggression and will often engage Zamorakian followers if they get within range, dealing next to no damage to them in the process as they use an extremely weak ranged attack. Bandosian and Armadylean mages are rarely killed as the former has high health and Defence, while the latter is very sparse and can only be fought with ranged or magic. Armadylean mages do not count as aviansie either like their warrior and ranger counterparts.

The Zarosian variant is far more powerful than the other mages, possessing a very high Magic level, max hit and melee defensive bonuses. As followers of Zaros, they also utilise the Ancient Magicks; smoke spells have a chance of inflicting poison, shadow lowers the player's Attack level, blood heals the mage (including hits that would have dealt damage but is blocked by prayer) and ice can bind players. The ice spells will not notify the player that they have been frozen should the effect go off.

As with all other common monsters in the God Wars Dungeon, appropriate god protection is needed or players risk meeting a swift death.

Drop rates estimated based on 100,068 kills from the Drop Rate Project, unless otherwise cited.

Drop rates estimated based on 23,013 kills from the Drop Rate Project, unless otherwise cited.