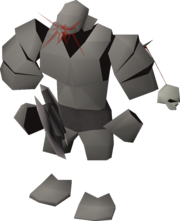 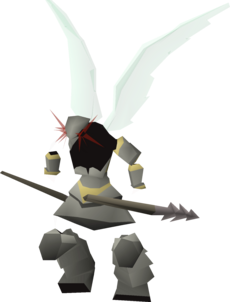 Within the God Wars Dungeon Rangers are only found inside the God bases. However you can also find Saradomin variants in the main area.

For players killing spiritual rangers as part of a Slayer assignment wanting to avoid being attacked by them, the main area contains Saradominist rangers who are often engaged in combat with other monsters.

In the north-eastern corner of the Zamorak's Fortress, there is a spiritual ranger who will sometimes not retaliate when attacked from the north, but this is inconsistent.

In the Bandos Dungeon section, they can be safespotted by using the white bricks rubble on the floor as cover between you and them.

As with all other Armadylean monsters, Armadylean rangers may only be attacked with Ranged or Magic.

The Armadylean variant is not considered an Aviansie for the purposes of a Slayer task, despite the message "The Aviansie is flying too high for you to attack using melee." received upon attempting to attack them with melee.

Spiritual rangers will not attack you if there are objects such as rocks between you and them, despite them using a ranged attack style.

The Zarosian variant has a special attack where they will shoot a glowing orange arrow at the player's position. If the player does not step away from the spot, they will be hit for a substantial amount of hitpoints (up to 35), this attack hits through Protect from Missiles and will deactivate active Prayers and will bind the player for a few seconds.

Drop rates estimated based on 260,490 kills from the Drop Rate Project, unless otherwise cited.

The average Spiritual ranger kill is worth 317.85.

Drop rates estimated based on 66,151 kills from the Drop Rate Project, unless otherwise cited.