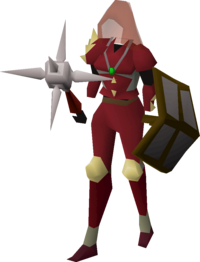 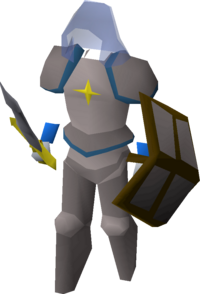 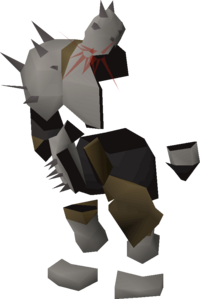 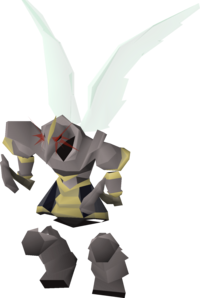 For players killing Spiritual warriors as part of a Slayer task wanting to avoid being attacked by them, the main area contains Saradominist warriors who are often engaged in combat with other monsters.

As with all other Armadylean monsters, the Armadyl variant can only be attacked with Ranged or Magic. They also use Ranged instead of melee to attack.

The Armadylean variant is not considered an Aviansie for the purposes of a Slayer task, even though when the player attempts to attack one with melee a message in the player's chatbox appears saying "The Aviansie is flying too high for you to attack using melee."

A Zarosian warrior uses its special attack to damage a player.

The Zarosian variant has a special attack where they will summon four smoke clouds around the player, which slowly move in to their location over 5 ticks. If the player does not step away from the spot, they will be hit for a substantial amount of hitpoints (up to 40).

Drop rates estimated based on 63,141 kills from the Drop Rate Project, unless otherwise cited.

The average Spiritual warrior kill is worth 1,213.5.

There is a 4/127 chance of rolling the gem drop table.

Drop rates estimated based on 27,840 kills from the Drop Rate Project, unless otherwise cited.