From Old School RuneScape Wiki
Jump to navigation Jump to search
For a guide and list of Splashing experience rates, see Splashing/Guide.

Splashing is the act of purposely wearing items with bonuses that total at least -64 Magic attack (e.g. full plate armour with d'hide vambraces, or full plate armour and a cursed goblin staff), and attacking a weak opponent that cannot be interacted with by other players (such as any NPC that can be pickpocketed, or rats, which can be killed by cats). Simply bring enough runes, and turn auto cast and Auto Retaliate on.

Prior to a hidden update implemented on 10 September 2015, a player could go away-from-keyboard (AFK) until the game forced the player to log out after six hours provided the player kept their computer on and had a reliable internet connection. After an update, splashing is still possible, but after twenty minutes the player will stop auto-retaliating, making it impossible to splash for hours as in the past. 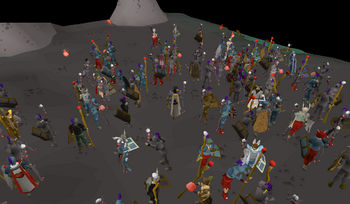 Players splashing on other players in the single-combat area of Clan Wars. As random events did not occur in there, players could splash on another player for up to six hours, provided both players go AFK at the same time.

This was considered a cheap and effective way of training Magic through low levels because experience rates are based on the spell you cast rather than armour/damage bonuses, and six hours of training with Strike spells typically costs less than 40,000 coins. However, its effectiveness quickly dimishes once higher level spells are used as just a single hour of training Bolt spells can cost over 100,000 (though the XP rate is not even doubled). As no damage is dealt to your target, splashing will not give you any Hitpoints experience.

Splashing was once a very popular way to train Magic after an update, which made random events optional, allowed for players to leave their avatars unattended for six hours while splashing on an NPC or another player in a safe minigame (such as Clan Wars) before the game client forced them to log out. Because of this, some players frowned upon such methods of training, even considering it cheating, although it was not against the game rules.

Such controversial mechanics, which was an unintentional consequence of making random events optional, prompted Jagex to release the Old School Game Integrity Survey, in which they raised multiple issues about content or activities where players believe such activities are undermining the integrity of the game, including splashing. The results were addressed officially in a followup:

This only further escalated the controversy, as players resort to splashing on PvP worlds or in safe minigames where random events do not occur. During the team's weekly Q&A sessions, Mod Mat K had stated that Mod Ian Gower (one of RuneScape's original founders) was constructing a virtual data warehouse in which he will be able to assess such issues and make an informed decision based on the given statistics.

On 10 September 2015, twenty-six days after the data warehouse started operating, and approximately ten minutes before the team's weekly Q&A sessions, Jagex implemented a hidden update in which players who do not interact with the client for twenty minutes will not retaliate, forcing players to actively tend to their accounts. 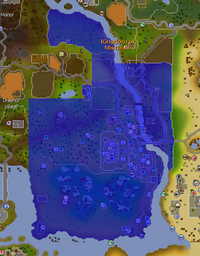 Map provided by Jagex, outlining where users will gain no Magic experience if splashing.