Staff of the dead 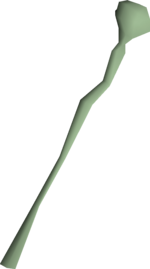 The staff of the dead is a bladed staff that requires 75 Magic and 75 Attack to wield. It is dropped by K'ril Tsutsaroth, and counts as a Zamorakian item while in the God Wars Dungeon and in the desert Bandit camp. It is one of the few items that boosts the player's magic damage, boosting it by 15%.

When a combat spell is cast with the staff, there is a 12.5% (1/8) chance that the staff will negate the rune cost for that spell. The staff can be substituted for a slayer's staff for casting Magic Dart (and is more accurate than a Slayer's staff), and can autocast Flames of Zamorak, Crumble Undead and Magic Dart.

The staff is notable for its offensive melee stats, which are unusually high for a Magic weapon. Its stats are comparable to the dragon longsword; the longsword has +3 better stab bonuses, but the staff has +1 better slash and strength bonus in addition to the magic damage boost, accuracy, and a faster attack speed.

A player using the staff of the dead's special attack, Power of Death.

The effect lasts for one minute after using the special attack, but is immediately lost if players unequip the staff. In addition, the effect stacks with the PvP damage reduction effect of the Protect from Melee prayer.

The special attack cannot be used in the Duel Arena if magic is disabled.

Players with level 59 Crafting can attach a magic fang to the staff using a chisel, creating a toxic staff of the dead. This enhances its magic attack bonus by +8, and has the ability to infect a target with venom. However, taking advantage of these benefits requires using Zulrah's scales to charge the staff. Targets can only be infected with venom while using a magic attack, but using both melee and magic attacks will consume Zulrah's scales.

Players can bring a Staff of the dead and Guthixian icon to Juna to upgrade it to the staff of balance. This process is irreversible. The only differences between the two staves is that the staff of balance is able to autocast Claws of Guthix instead of Flames of Zamorak, and it counts as both a Zamorakian and a Guthixian item while in the God Wars Dungeon and in the Desert Bandit Camp.