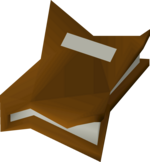 The stained journal is a book found in the Grand Library in Prifddinas, which requires completion of Song of the Elves to access.

The journal is written by an unnamed dragonkin, who performed experiments in the Poison Waste and eventually managing to create Zulrah, the hooded serpent.

The following text is transcluded from Transcript:Stained journal.

I finally arrived, and I must say this putrid wasteland is full of all sorts of wonderful chemicals to test on my experiments. Those filthy humans may have driven us all into hiding, but I at least have found myself a wonderland of a new home. The swamp itself is massive, I'll never run low on supplies. It is nearly abandoned as well, so I may work in peace. While my lesser colleagues have their secluded little islands scattered about the world, I now have an entire ocean of wonders to play with. The only annoyance I've come across so far are these obnoxious little humans running around and disappearing into their holes in the mountains, but they are easy to avoid. Now, I've dawdled enough. It's time to get to work.

This place really is incredible. The sheer scope of what can be done here... Those charlatans could never comprehend it. Serpents with venomous tails, spit as poisonous as the swamp itself, and power over magic that rivals even wyrms, it's all so fantastic! I have a vision now, a serpent that could kill anyone I please, one that could cover the world in a deadly smog and destroy all my enemies. What a beautiful world it would be! I must get started now, but first I must dispose of these vorkath.

This swamp really is a beautiful place. I receive everything I need from it and return what I no longer require. The sludge devours my failures and wipes them away, like they never existed in the first place. It is a shame, but I had to dispose of my greatest creation yet. This serpent held potential but it just isn't what I needed. It was unfortunate, but I hope the next ones will be better.

I do not believe in them but I have no other way to describe it! This is... a miracle! I returned to the wastes today to discard my newest batch of vorkath and something was waiting for me! It is so much bigger now but I could recognize my work anywhere. My greatest failure is now my greatest joy! The serpent I had such high hopes for but ultimately had to destroy, it has survived and is now unlike any other of my creations. It towers over even me now, and it's smart. I can see intelligence in its eyes. I've decided to observe it, see what I can learn for either this creature's future or my own. I've never been more excited!

Despite my best attempts to stay hidden and observe, my old vorkath has found me snooping. I greeted it and it actually understood what I was saying! I was right, the creature is intelligent! It has grown even larger since I first laid eyes upon it, it's incredible how quickly its size and power grows in the swamp. Theses wastes truly are miraculous. The serpent's tail drips with poison, its fangs with venom, and even its physical self warps and changes with power. I've seen its scales glow cyan with magic as it shot a hole into the mountain! I've seen its body burn with the colour of magma as its tail smacked the toxic waters and created tidal waves! I've seen it create a smog so foul from its breath it killed what little plant life was left living on the swampy shores! I've even seen it control the other vorkath of mine, the ones I disposed of and thought had rotted away in the wastes! My 'vorkath' is nothing of the sort at all! My beautiful serpent... My Zulrah... You are perfect.

I gave my creation life. I gave it power. I gave it intelligence. I gave it a name. Now I require it to serve me. My Zulrah shall do my bidding and help me destroy all who would dare oppose me! My creation is always hungry, I'm sure it would enjoy eating my enemies. I've come to speak with it once again, to inform it of my plan of domination. It seems pleased! What a beautiful smile with those wicked fangs. The little vorkath it controls are crowding and drooling at my feet. They look hungry too. Zulrah's toxic spit is dripping onto my head but I'll let such behavior slide. After all, my pet is hungr--