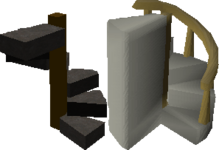 Staircases are found in buildings or houses with two or more stories. They may also be found leading downwards into dungeons. A staircase may simply be a row of steps, or it may be in the more ornate form of a spiral staircase. All staircases are climbed at the same speed (as they have no animation for climbing them) so the size differences are purely aesthetic.

When a player right-clicks a staircase they will usually be given three options based on whether they lead up as well as down: 'Climb', 'Climb-Up' and 'Climb-Down.' If a player chooses the climb-up or climb-down option their character will do just that, either progressing to the next floor or digressing to the floor below. If a player selects the 'Climb' option, or merely left-clicks the staircase, a message will appear. The message will ask the player to choose whether they wish to climb up or down the staircase.

New players may find that the first staircases they use are those in Lumbridge Castle, in the north-west and south-west corners. They are used to access the upper stories of the castle, including the bank there. In Tutorial Island, when it returned after the new Lumbridge Tutorial was removed, a glitch occurred where most stairs could not be used, along with many other changes.

Staircases bring characters up or down a level. Most of the time, you can see all or most levels using a graphic setting.

These types of staircases can be built depending on your level in Construction.