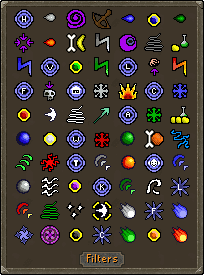 The standard spellbook are a group of Magic spells available to all players, being unlocked by default upon character creation. Standard spells make use of all runes except Astral. Staves are also required to cast some of the spells, including Iban's staff, slayer's staff or staff of the dead, Saradomin staff or staff of light, Zamorak staff, and Guthix staff or void knight mace.

Offensive spells such as Water Strike and Fire Blast are simple: They deal damage to one target, with the amount of damage varying according to the spell's maximum hit and other modifiers. The accuracy of these spells is determined by a number of factors, none of which are the spell itself; all other things being equal. There are four main elements for combat spells in the standard spellbook: wind (air), water, earth, and fire. Additionally, there are five increasingly strong groups of spells: strike spells, bolt spells, blast spells, wave spells, and surge spells. Among these groups, wind spells are always the weakest, and fire spells are always the strongest. The elements themselves do not seem to affect much except in a few circumstances; for example, water spells are twice as effective on lava beasts.

Curse spells are combat spells that are primarily used to temporarily lower the target's stats or prevent movement. As Magic is meant to be strong against melee users, the various curse spells lower Attack, Strength, and Defence by either 5% or 10%. Additionally, Tele Block may be classified as a curse spell, although it prevents teleportation rather than lowering a stat.

Support spells offer a range of benefits to the caster, such as increasing damage, curing poison, and healing other players. However, the standard spellbook only offers one support spell, which increases damage for god spells.

Utility spells are spells that are typically used outside of combat, such as enchanting items.

Alchemy spells convert items into other items. Including the following: Low Level Alchemy and High Level Alchemy convert items into certain amounts of coins, and Superheat Item may be used to forge ore into bars without a furnace. These three spells all use nature runes and fire runes. Standard magic also includes; Bones to Bananas, and Bones to Peaches, which use Nature, Earth, and, Water runes.

Enchantment spells imbue certain items with magical properties, giving them new abilities. Any piece of jewellery crafted with a gem may be enchanted by the proper Enchant Jewellery spell. Enchanted jewellery items have a wide variety of effects, such as teleportation, increased equipment bonuses, and assistance in skills such as Smithing and Runecraft. Additionally, the Charge Orb spells may be used to imbue unpowered orbs with elemental magic, after which they may be used to make elemental staves. All enchantment spells make use of cosmic runes.

Crossbow bolts with tips made from gems may be enchanted by members with the proper Enchant Crossbow Bolt spell, where they then gain secondary effects in combat.