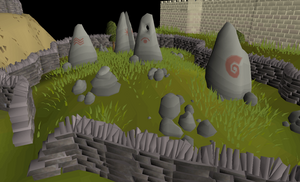 The Standing Stones are mysterious stones found north of Falador. Their current purpose is unknown, however, Mod West reportedly plans to utilise them in the Warding skill, provided it passes a poll.[1]

At RuneFest 2010 it was revealed that they were added because the graphics designer was told to make some existing stones look "interesting".